After I left Chiang Mai, I headed down to Ko Tao, and island off the East Coast of Thailand.  I was writing out how I picked this island, but it started to bore me.  Basically, there wasn’t any pressing issue other than I wanted to learn to scuba dive, be close to yoga, and be able to get there relatively easily from Chiang Mai.  Still too long of an explanation, but oh well.

To get to Ko Tao, I flew from Chiang Mai to Koh Samui.  Then I took a bus to the pier and took a ferry to Ko Tao.  Before I get too excited about Ko Toa, let me just say Koh Samui was cool!  It’s an international airport, but I think it only allows one flight at a time.  The “terminal” is open air.  There is one baggage claim.  It’s super cute!

Anyway, on to Ko Toa, or Turtle Island in Thai.  It was awesome and a very unique experience.  It was the least commercial tourist place I have ever been.  Half the island are Thai and half are expats who are living the scuba life.  But many places didn’t speak English.  The roads weren’t marked.  Places didn’t have addresses.  There were chickens and trash all over.  And there was beautiful beaches with a jungle back drop.

There are 2 exciting things about my 5 days there.  One, I rented a moped and crashed.  It was the first time I’d driven on the “other” side of the road (drive on the left like in England, not right like the US).  I was terrified but it was exhilarating at the same time.  In the end, I think that the spirit/angel of my Mom was with me.  She would have had a heart attack if she knew I was renting on moped in a foreign country on hilly dirt roads.  She freaked out when I told her I was thinking of buying a moped in Minnesota and told me how many people she knows that got hurt on them (it was 1 person, but it was impactful).  So anyway, I was going up the steeeeeep gravely road to my air bnb and I moved to the other side to get around a big puddle (because who knows how deep that shit is) and a big sandy patch and then a guy came out of a driveway and I had to veer back, but it was too steep and when I tried to veer I slid down.  The bike landed on me and I landed on my elbow and ankle.  I think my mom was with me because I really only got a bad scratch on my arm, but nothing else wrong.  It was enough to be like THIS IS A DUMB IDEA YOU’RE GOING TO GET HURT AND RUIN YOUR TRIP but not enough for me to actually get hurt?  Apparently a scrape from a moped accident is called a Thai Tattoo.  Mine still hurts and seems to be a ways away from being healed… Anyway I drove it the rest of the day, then decided to just stay at the scuba school for a few nights.  It was free but no air conditioning.  Actually, it was the grossest room I’ve ever stayed in, but the only way to get from my airbnb to scuba was a moped and I figured I shouldn’t drive after drinking… so one night turned to 3.  Then the last night at my beautiful air bnb.  The good story about staying at the scuba school, other than it being 10 feet from where I needed to be in the morning and I could stay out late with my new scuba friends is that I now am more tolerant of staying in shitty places hahaha.

Anyway, the BEST part of Ko Tao was scuba diving!!  It was a four day course, with 6 hours in the classroom, 8 hours in the pool and 4 ocean dives!  My class was 2 girls from Germany who are 19 and taking a gap few months before they go to college.  They weren’t friends before the went on their trip!  They just met each other once.  Then my buddy – in scuba diving you always have a buddy.  In a nut shell, your buddy helps you if something goes wrong while you’re under water.  My buddy was a guy from Finland who was great!  We hung out most of the time and were buddies IRL not just scuba haha.  The instructors were a German who had been teaching for years and a guy from New Zealand who had recently finished his certification to be an instructor.  The school had tons of students and divers and it was a really fun community.  I hadn’t really been exposed to the diving world, but all these people had similar stories where they decided to leave their jobs and homelands and scuba.  I can see the appeal of it.  At first, I was actually kinda scared – first time in the pool and in the ocean.  It’s not natural to just be chilling out under water!!  But by the final dive, I was hooked.  At the end of yoga I’m going to go back to Ko Tao and the dive school and get advanced diving certified.  Then I can dive pretty much anywhere (with a dive master leading me).  I’m pumped to try to dive on the rest of my trip in Asia/South Pacific and the rest of my time off.

Here is my scuba group after our first day of ocean diving, on the boat back to shore and then naturally a selfie out at the bar: 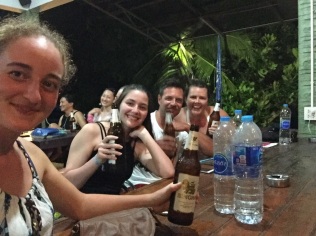 I’m trying to figure out albums still.  But there are lots of good beach and jungle pics from Ko Tao that I need someway to immortalize for myself and if this doesn’t work it might have to just be facebook.  But I believe in my millennial ability to figure it out 🙂

In the meantime, I’m on day 3 of my detox before my yoga teacher training starts.  The relaxing part of the journey is taking a break and now we’re at the “let’s get better” phase.  Wish me luck!!

One thought on “Turtle Island”