Hello from beautiful Thailand!!  Hard to believe I’ve been gone almost 2 weeks.  There is so much to say about the highs, lows and new perspectives on life.  Disclosure now, this will be long and rambly, but since I have a week of detox next week where all I have to do is meditate and take vitamins and probably shit a lot, I’ll make better updates of the cool (scary, funny, awesome) moments of the journey.  I’m also working on a photo album.

In one line: I’ve now been to the super power that is the People’s Republic of China.

Low: Never had fun, just trying to transactionally get from one point to the next.

Craziest thing: Nothing really crazy.  TONS of bikes as in pedal yourself bicycle not mopeds, and you can’t get money out of an ATM unless you have a card from the Bank of China.

If I could do it all again, I would do differently: Try to stay longer, or have a least sometime during the day, and come with more cash!

Blah blah blah: I was only there for 18 hours but with customs and flight delays I really was only there for a night.  The big take-away is, I really shouldn’t just go somewhere for a night.  I got lucky when I was just in Amsterdam for a night.  Shanghai wasn’t bad, but I think I need the day to get the lay of the land and getting to and from the airport is usually the hard part.  Once I’m in the city, it’s fun.  If my KPIs were simply to just go to China and eat dumplings, they were met.  But it wasn’t awesome.  It was just ok.  If I go back to China, I need more time and more of a purpose.  But overall, not bad!

In one line: Great place for me to cut my teeth on being in Asia!!

Low: Death by food poisoning.  I tried to be careful, but I drank iced drinks and got fruit from street vendors.  WARNING: GROSS CONTENT… But after my cooking class I started puking and shitting.  I did both at the same time.  It was classy.  I call it shommiting now.  But I haven’t been sick like that in a long time.  I was out for a whole day and down for another 2.  Even better – when I first got sick there was a storm and the power was out for 6 hours.  So I was shommiting in the dark and heat.  GROSS CONTENT DONE.

Craziest thing I saw: Gosh, so much is different in Asia than in the US/Europe/Caribbean.  In America, kids need to sit in car seats in the backseat until they’re like 7 years old.  In Chiang Mai, I saw a family of 4 on a scooter/moped – dad driving, kid in middle, mom holding a baby on the back.  After 2 weeks here, that doesn’t shock me anymore but at first it was like dear Lord.  Also, the market was so crazy!  I have pictures of that too.

If I could do it all again: I would actually read about how long you could can stay in Thailand because I had to spend 4 hours at the immigration office getting a visa that will let me stay through yoga.  I also would not bring anything other than my allergy medicine, bras and underwear.  You can buy everything for so cheap in Thailand and its cool!  I also would not have bought the large elephant painting.  I need to mail it home.  It doesn’t fit in my bag.  WTF.  I was just so smitten with the elephants.

Blah blah blah: My first real landing spot.  I picked it because it seemed easier than Bangkok.  Then I heard about the elephants and that sold me.  One-liner: It was good.  I would go back, but am not in a hurry to go back.  It was easy to get around, felt safe, wasn’t too big, had benefits of being a city but also able to go into the hills/jungle.  My first impression was rough in that, on the flight from Shanghai to Chiang Mai, I sat next to a woman and her son.  I don’t think the woman has ever brushed her teeth.  She smelled like rotten fish too.  It was rough.  Then I found, that smell of rotten fish is a smell common to some places in Thailand.  I now call it the smell of Thailand.  I learned in my cooking class it is the smell of sundried shrimp paste.  In my cooking class, I was with one British man who now lives in Taiwan.  It was the first non-Chinese person I had been with on a tour.  In classic Vanessa luck, I chose to go on a week when China has a holiday so kids are off school and some people have time off work… so it was just tons of Chinese people haha.  Anyway, Michael and I were both excited to know what the smell of Thailand was really from, and agreed any recipe that needed it wasn’t worth learning hahaha.  But, cooking class was super fun.  I will make my recipes.  If I end up in Bangkok on my way out of Thailand, I will maybe try another cooking class again.  It was cool.  I also had like 6 hours of massage.  It was great!  Thai massage is when you put on this little outfit and they beat you up.  I realized after that I need to ask for an oil massage haha.  They still beat you up on that, but it’s less aggressive.

Alright, I’ve been longer than I meant to be, and need to get on my ferry soon to go from Koh To where I have been for the last 5 days, to head to Koh Phanghan for my detox and yoga!  Koh To is AMAZING with many high and lows so that will be a fun update.

Thanks to everyone for the kind words of support and encouragement.  It really does feel amazing that so many people care and are supporting me through this incredible journey 🙂

The least exciting of all of the pics that go along with my story, but the first one in the phone… bikes at 11PM at a busy intersection in downtown Shanghai 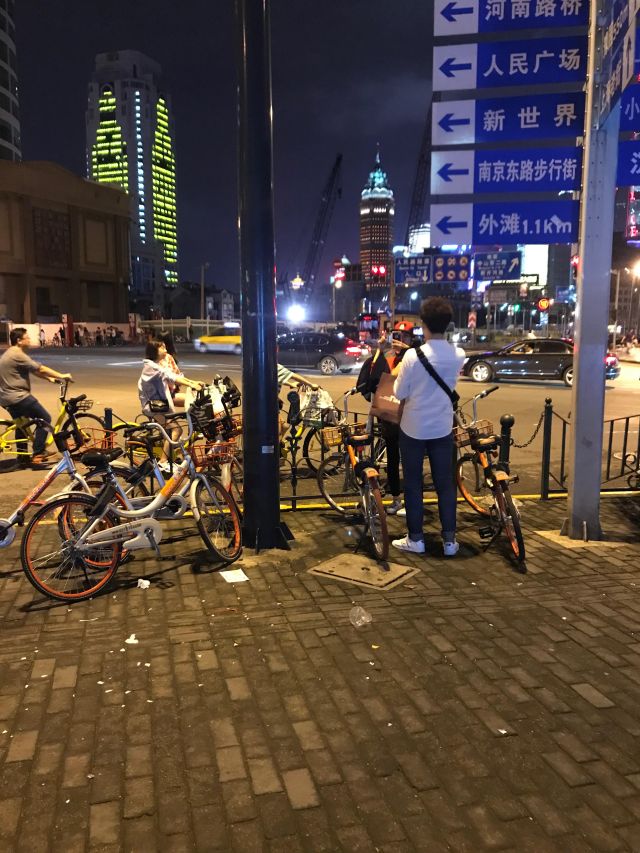